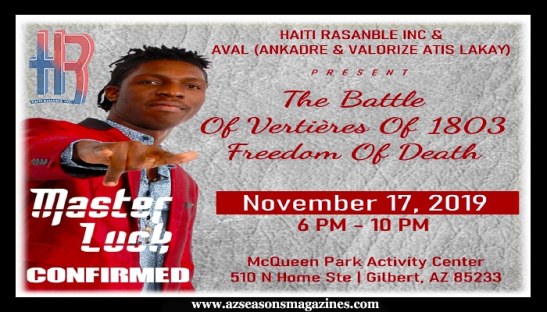 The Battle of Vertieres is the last large battle of the Haitian Revolution (Haitian war of independence) was fought between Haitian rebels and French expeditionary forces on November 18, 1803 at Vertieres

Today, it’s a holiday for the Haitians. Since this day played a crucial point in our independence. It used to be called the Day of the Army as well since the army was dissolved it is just Battle of Vertieres.

Vertieres is just a place in Haiti. Haitians led by Jean-Jacques Dessalines attacked a strong French-held fort of Vertieres, near Cape Francois (to the north of Haiti) and won a decisive victory over French colonial army under General Comte de Rochambeau and forced him to capitulate the same night. Haitian Ninth Brigade under Francois Capois played a crucial role in the victory.

As a result, Independent Republic of Haiti was proclaimed on January 1, 1804. November 18 has been widely celebrated since then as the “Day of the Army and Victory” in Haiti.

So, you are invited to take part in this great historical celebration.

What you will leam and get?